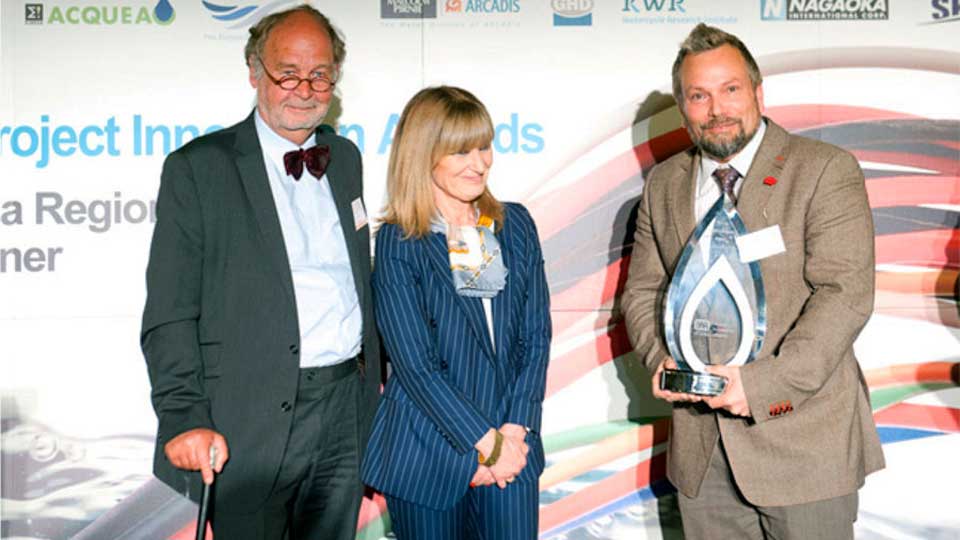 The demonstration plant Andijk III of PWN Technologies has won the Project Innovation Award 2012 of the International Water Association (IWA). The project received the highest score based on the judging criteria of Innovation, Future value to the water engineering profession, and Sustainability.

The demoplant is a pretreatment installation for the production of drinking water, integrating two technologies that PWN Technologies developed based on suspended ion exchange (SIX®) and ceramic membranes (CeraMac®). SIX® and CeraMac® result in higher water quality, lower energy consumption and a lower environmental burden.

For about 80 years coagulation in combination with filtration has been the mainstream approach for removing particles from drinking water. Coagulation’s main aim was the removal of suspended matter. Over time the importance of organic removal has grown and it has been targeted to reduce disinfection, by-products and improve operation in new downstream processes. There are however serious limitations to this approach of pretreatment: it produces a lot of sludge and the amount of organic material that can be removed is limited. As the water industry switches from conventional sand-filtration based to more efficient technologies such as membrane filtration and advanced oxidation, pre-treatment technologies are needed.

PWN Technologies has been intensively researching alternative treatment of drinking water based on suspended ion exchange (SIX®) and ceramic membranes (CeraMac®) to remove all organic matter. The SIX® process is an efficient technology that uses recyclable resin to remove organics and serves as a robust pre-treatment system for membranes and UV treatment.

PWN Technologies (PWNT) has developed an innovative design known as CeraMac®, which greatly reduces the costs of the ceramic membrane system to a level which makes the system cost competitive with polymeric membranes. CeraMac® has more benefits: a small footprint, low energy consumption, more reliable operation and greater efficiency at a relatively low cost. CeraMac® produces a high level of water quality in places where this is difficult or impossible to achieve using conventional treatment processes.

The demonstration plant in Andijk, where SIX® and CeraMac® are integrated, was completed in 2011 and has operated very efficiently.

The plant has a capacity of 50 m3/hr. SIX® serves as a pre-treatment for the CeraMac® system by removing organics that would normally stick to and foul the membranes. The plant has been used to try various resins and optimize various operating conditions. The main aim was to reduce cost, increase sustainability and improve water quality. All these objectives have been attained.

These technologies are also applied in the new water treatment plant Andijk III. The water supply company PWN has commissioned PWN Technologies to build this plant. which will be operational at the end of 2013.

Says Mr. Pieter Spohr, CEO of PWN Technologies: “We are very honoured to be receiving this award. It is a worldwide recognition of the technologies we have developed at PWN Technologies. PWN Water Supply Company North-Holland embraced the SIX® and CeraMac® technologies, and several water companies have shown keen interest. PUB has a CeraMac® demonstration plant working at the CCK Waterworks in Singapore. We believe in our technologies. This award shows we are right. And above that: it is an incentive to continue to innovate.”