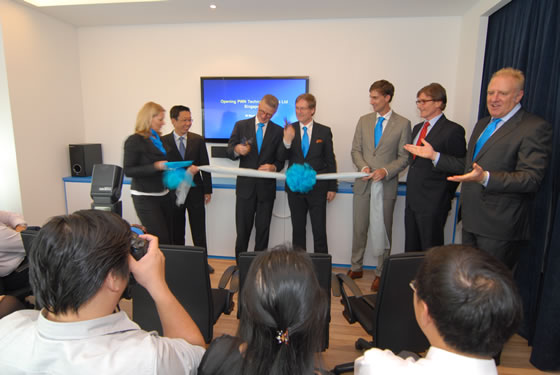 The event marked another milestone in the company’s commitment to bringing its sustainable, advanced water treatment solutions to the Asia-Pacific since its initial entry in 2009. In 2010, it became a founding sponsor of the Singapore International Water Week, a global water event hosted in Singapore. It was also awarded funding for a project supported by the Singapore National Research Foundation (NRF) under its Environmental & Water Technologies Strategic Research Programme, and administered by the EWI. The project’s aim is to build and test a SGD 5 million CeraMac® demonstration plant at Choa Chu Kang Waterworks in 2011, which became operational on 1 July 2011.

The Singapore office will allow PWNT to further develop its potential in Australia, Singapore and Vietnam, and establish relationships for growth into new markets. Other plans to be managed out of Singapore include the development of Human Resources and Research & Development opportunities with universities and other partners in the region, in line with PWNT’s mission of delivering innovative, advanced and sustainable water treatment solutions, especially in highly urbanised areas.

Mr Chew Men Leong expressed his support of PWN Technologies’ commitment to the region. “PWNT’s choice of Singapore as the first Asia-Pacific office site outside of the Netherlands is a testimony to Singapore’s growing status as a Global HydroHub. R&D is a key driver of growth in our water industry and we look forward to PWNT’s contribution in boosting research and technological capabilities in the sector here,” said Mr Chew. Highlighting his commitment to the success of PWNT’s Singapore office, Mr Pieter Spohr, CEO of PWN Technologies revealed that the regional office targets to manage close to EUR 60 million of projects over the next three years in the region.

The opening provided the opportune moment for the revelation of the CeraMac® plant’s operational results at CCK Waterworks. In operation for the past 8 months with great performance stability, the plant has yielded results that have exceeded all expectations according to PWNT. The higher flux that the CeraMac® plant is achieving relates to lower capital and operating costs for water treatment.

The effectiveness of the SIX® and CeraMac® technologies has also led to the appointment of PWN Technologies to build a water-treatment plant based on these innovations in Andijk, The Netherlands. The plant will be completed at the end of 2013.