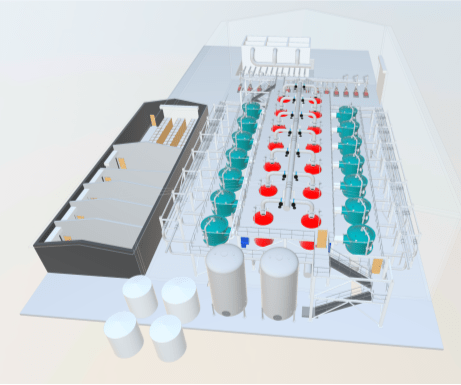 Once completed, the Church Wilne Water Treatment Works (WTW) will be the 7th utility in the world to implement full-scale process technologies of PWNT.

The Church Wilne site will include in-line coagulation and adsorption (ILCA®) and ceramic microfiltration by CeraMac®. Suspended ion exchange (SIX®) is also being evaluated on a pilot-scale for a future asset implementation cycle.

The planned treatment process is shown in Figure 1. Constructed wetlands will serve to treat for ammonia and nitrate, ILCA® is for flocculation, CeraMac® serves as the filtration barrier (reducing turbidity and removing pathogens such as cryptosporidium), Granualar Activated Carbon (GAC) is for polishing, and ultraviolet light irradiation (UV) is for primary disinfection. Final disinfection will be with chlorine. SIX® is a possible future addition to remove DOC.

The SIX® process (Figure 2) is based on an advanced plug flow resin contacting reactor followed by a specially designed lamella settler. The settled resin is then completely regenerated and re-used. The continuous adsorption process operates under stable kinetics.

SIX® would be implemented as pre-treatment to coagulation, and is expected to remove up to 60 percent dissolved organic carbon (DOC) based on tests with this river water. While DOC is not regulated, it does contribute to the formation of disinfection by-products (DBPs) after the treated water is chlorinated which can be harmful to human. SIX® will lower the DOC concentration and thus also reduce the formation potential for DBPs. SIX® might also remove bromide, which would lessen the formation of brominated DBPs. SIX® with its anion exchange resin will remove nitrate.

One of the key advantages of the SIX® process is that it allows for the use of different types of resin from different manufacturers. An anion exchange resin is used for DOC removal, and pilot-testing will confirm the resin dosage that is needed to achieve the desired water quality goals.

As a process, the SIX® power use has been minimised with air mixing of the resin in the contactors and low pressure loss through the process. The single pass system which regenerates the resin on a timed basis means that a lower dose can be used because the resin adsorption sites are available all of the time (i.e., there is no bleed stream for regeneration leaving used resin in the system).  Also, by keeping the resin clean, optimum adsorption is maintained.

CeraMac® is a microfiltration filter system with a nominal pore size of 0.1 um.  The membrane is supplied by Metawater (NGK) of Japan. This process will serve as the filtration barrier to meet finished water turbidity limits. The CeraMac® is also credited with 4.0 log Cryptosporidium, 4.0 log Giardia, and 1.0 log virus removal.

CeraMac® operates with multiple membrane elements in a single vessel. Flocculated water from the ILCA® will enter the CeraMac® system, were particulates and turbidity will be removed.  The CeraMac® system will be backwashed based on a loading to the system and a chemically enhanced backwash (EBW) regime with chlorine washes and acidic peroxide washes will be used to help control fouling during operation. Clean-in-place (CIPs) will be performed with traditional CIP chemicals: chlorine and acidic peroxide.

The CeraMac® system is proven to be a sustainable filtration system for surface water plants. This is due to several features which are optimized to minimize the emissions over the life of the plant. First, the CeraMac® system is designed to match the expected life of the ceramic membrane. In practice, this is >20 years, based on the oldest membranes in operation by Metawater being nearly 25 years old and still in operation. The CeraMac® vessel and internals are also durable, and expected to be in operation over this time span. Second, the energy use of the CeraMac® is low compared to other filtration systems. With optimised pretreatment, the fouling can be minimised, thus also minimising the energy use for pumping water through the membranes. The CeraMac® uses a high pressure backwash (at up to 5 bar), and this provides a rapid and extremely effective backwash of the membranes. This translates into less downtime for backwashing and better performance recovery after backwashing (availability generally >95%). The air-spring backwash of the CeraMac® is also more energy efficient than a pumped backwash, because the air pressure is not lost during operation, and only a low energy use is needed to maintain the system air-spring. Finally, the components of the CeraMac® system are nearly 100% recyclable.  There are no plastic components or unique potting materials that cannot be recycled.

The Church Wilne WTW is being designed to operate with minimal operator attention.

As utilities look to new sources to improve resiliency within their systems, it is quite often the case that these sources are more challenging to treat.  Advanced treatment, such as with SIX® and CeraMac®, aid in the treatment of these sources, to help meet the finished water quality goals as well as provide robust and reliable treatment.  The proposed processes for the Church Wilne WTW are also fully automated and will require minimal operator attention.  With ceramic membranes as the filtration barrier, there is also considerably less risk associated with the breakthrough of Cryptosporidium and Giardia compared to other filtration alternatives.

Utilities are also aiming to implement low carbon treatment where possible. These SIX®, ILCA®, and CeraMac® processes were designed for ease of operation, longevity and reliability. Carbon footprint evaluations have shown that these technologies use less energy and have a long operational life – two of the main contributors to carbon emissions. The CeraMac® is also nearly 100% recyclable, an important factor when looking at the whole-life-carbon-footprint of a technology.

With these benefits, the Church Wilne WTW serves as an example of the synergy of advanced treatment and low emissions operation to treat a challenging source. Customers can expect excellent water quality, that has been produced with a lower environmental impact.