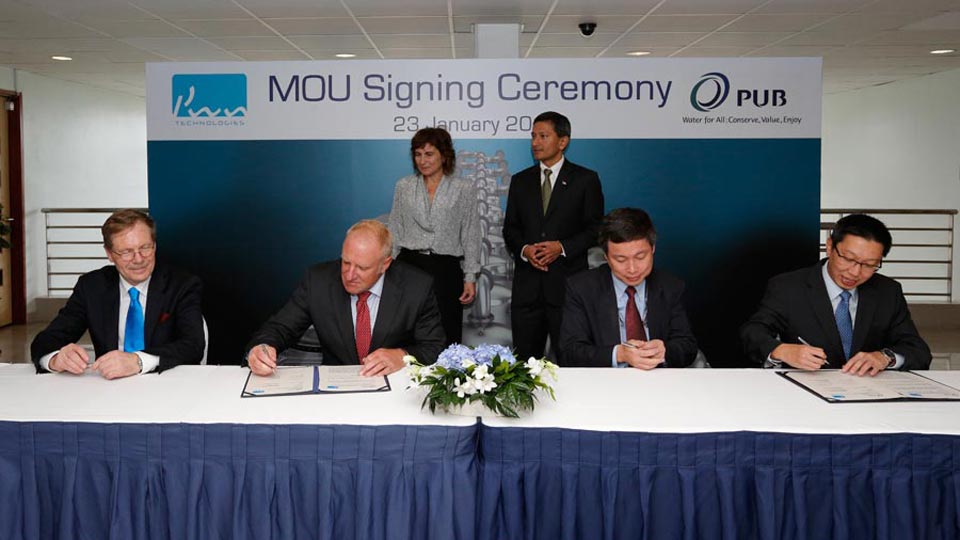 PWN Technologies and PUB, Singapore’s National Water Agency, have signed a Memorandum of Understanding on January 23, 2013 detailing further areas of collaboration in advanced water treatment. Both parties will work together to realize scientific and technological benefits by developing knowledge-intensive programs and projects.

The MOU was signed following the promising trial of PWN Technologies’ CeraMac® demonstration plant at Choa Chu Kang Waterworks, funded by the Environment and Water Industry Programme Office (EWI)’s TechPioneer scheme. With the ongoing demonstration testing, specific targets as defined in the TechPioneer agreement (such as high water flux and water recovery) are met.

The MOU is signed by the Chief Technology Officer of PUB, Mr. Harry Seah and the Director of Technology Application of PWN Technologies, Mr. Jonathan Clement in the presence of the Chief Executive of PUB, Mr. Chew Men Leong and the Chief Executive Officer of PWN Technologies Mr. Pieter Spohr. The event was officially witnessed by the Dutch Minister for Foreign Trade, Mrs. Lilianne Ploumen, and Dr Vivian Balakrishnan, Singapore’s Minister for the Environment and Water Resources in the presence of other senior Dutch government officials.

Says Mr Pieter Spohr: “This MOU underscores the strengthening partnership between Singapore and the Netherlands in the area of advanced water treatment and PWN Technologies is extremely honoured to play a leading role in developing this relationship.”

“PUB is always on the lookout for innovative water solutions and the best way forward is through R&D collaborations with the private sector, which allows the various parties to mutually leverage on synergies gained from marrying expertise and technological resources. We look forward to a rewarding long-term partnership with PWN Technologies to not only meet Singapore’s growing water demand more efficiently, but also add vibrancy to the local water R&D landscape, and boost Singapore’s status as a global hydrohub”, added Mr Chew Men Leong, who is also the Executive Director of EWI.

Prior to the signing, the Dutch delegation was given a detailed overview of the CeraMac® water treatment technology, which included a tour of the demo plant.