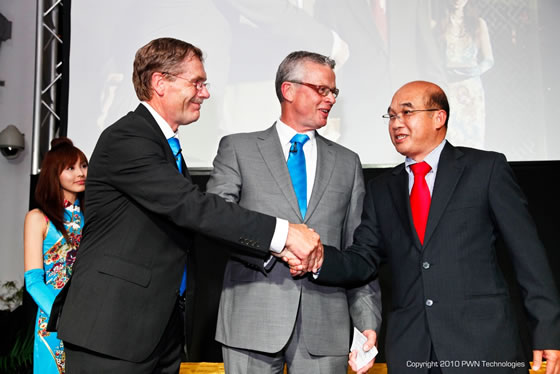 MOU for cooperation on PWNT’s Perfector series signed with Howaco

Signatories to the MOU were Mr Leo Commandeur, Director of PWN International Projects and Mr Xuan Truong Ngo, Director of Howaco. The signing was witnessed by Mr Pieter Spohr, CEO of PWN Technologies.

Howaco (Holland Water Supply Ltd. Co.) is a private water supply company in Long An Province – Vietnam, and one of the leading companies in Vietnam in the field of consulting, designing drinking water systems and applying modern Dutch technologies. Howaco is the first and only company that installed Perfectors R and P in Vietnam: water treatment plants with an excellent reputation. Its mission is to make the best water quality at the lowest cost, and to develop successful projects in Vietnam.