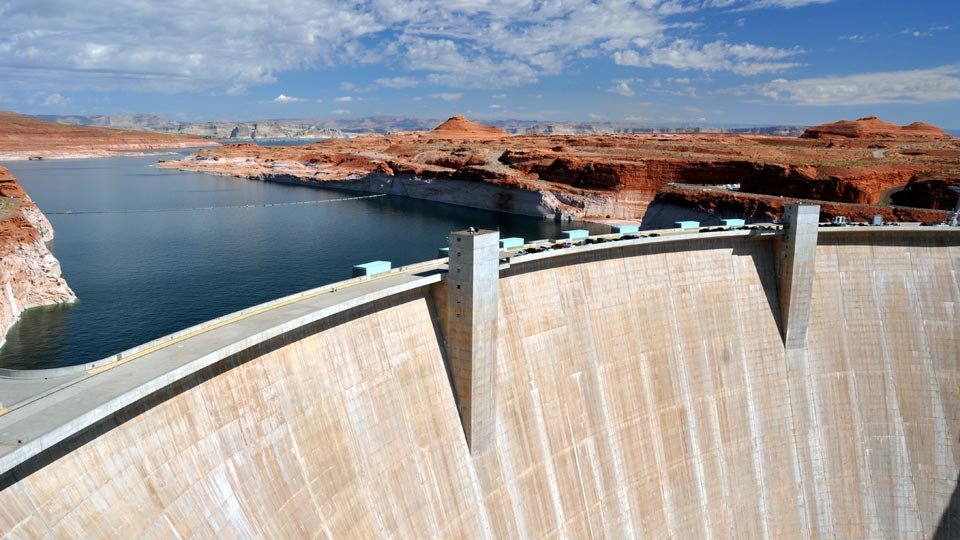 Straddling the border between Nevada and Arizona, the Hoover Dam is a symbol of human engineering might. For more than 70 years, its massive walls have tamed the flows of the Colorado River, fuelling the growth of cities such as Las Vegas that depend on it to supply water and power from its generating station. Today, however, the most striking feature is the lack of water stored behind the dam’s concrete arch.

A thick white band of mineral deposits marks the walls of Black Canyon above the water line. Locals call it the ‘bathtub ring’. It’s where the water used to be, before the start of the current decade-long drought. For officials charged with keeping water flowing to Las Vegas and other Colorado River communities, the bathtub ring is another reminder that worries about climate change are reshaping their future. “Around 2002, we really began to look at whether this was one of those traditional droughts the Colorado River has experienced – or are we looking at something very different?” said Patricia Mulroy, general manager of the Southern Nevada Water Authority.

Spring warming is coming earlier and harder, evaporating mountain snowpack that feeds the river and its two main reservoirs, Lake Mead and Lake Powell. “In two weeks in April, we lost the equivalent of 14 feet of Lake Powell in snowpack,” said Mulroy. “So it’s a pretty daunting and disconcerting reality that we’re beginning to get our heads around.”

For the utilities that supply the nation’s drinking water, one of the first casualties is the idea that the conditions of the past can predict the future, said David Behar, deputy to the assistant general manager for water at the San Francisco Public Utilities Commission. “It’s a game changer for water managers,” he said. “It takes the variability that we understand, and can live with, and amplifies it by an order of magnitude.”

For planners who are used to taking the long view – constructing expensive infrastructure that’s expected to last 30, 40, 50 years, or even longer – climate change is changing their rules, introducing new and hard-to-define levels of risk. “You have to plan decades ahead, in terms of water supply and source water needs,” said Dan Hartnett, director of legislative affairs for the Association of Metropolitan Water Agencies. “It’s too late if you wake up one morning and the tap runs dry.”

Walking along Las Vegas Boulevard, it’s hard to believe Sin City is facing a water crisis. The dancing fountains at the Bellagio Hotel and Casino spring to life every half-hour, captivating tourists. The nearby Mirage features a lagoon complete with towering waterfalls and a fake volcano. But those are illusions. For Mulroy, it is Lake Mead that tells the tale of Las Vegas’ water future. The reservoir’s water level fell this summer to its lowest point since 1965, when officials diverted Colorado River flows to fill the newly constructed Lake Powell. By late August, Lake Mead’s elevation hovered at just 1,092 feet above sea level.

Under the complex system of allotments that governs how Colorado River water is distributed to seven US states and Mexico, there is just 17 feet of wiggle room before the Southern Nevada Water Authority must, by law, begin seeking alternate sources of water. If the lake dips to 1,050 feet, the Hoover Dam’s hydroelectric power plant will shut down and Las Vegas will have to begin weaning itself off the river. It’s hard to tell how soon Lake Mead could hit this ominous milestone.

Under the harshest scenario, in which climate change reduces the runoff that feeds the Colorado by 20% by 2050, water managers could cut the risk that the river’s reservoirs would run dry by as much as one-third. But they would have to take aggressive steps to cut releases from Lake Mead and Lake Powell in times of drought. “Until 2026 or 2027, the risk is pretty low … something water managers can plan for,” said the study’s lead author, hydroclimatologist Balaji Rajagopalan. “But after 2027, through 2050 – that’s when the risk pretty much explodes.”

Meanwhile, a group of larger urban systems (including Las Vegas, New York, Denver, Seattle and San Francisco) has formed the Water Utility Climate Alliance. The group is less than 2 years old, and its members’ general managers meet every three weeks via conference call as they pursue an aggressive research strategy. WUCA is finishing two white papers: one examining the latest science on how climate change will affect the water cycle, and a second that examines strategies for making decisions in the absence of precise information about what the future will look like.

What that means is that some timeworn practices in the water business “have to be challenged,” concluded Mulroy, Las Vegas’ water chief. “I think it’s a conversation for the country that’s almost unavoidable. … The worst case, as far as I’m concerned, is if we are surprised by the magnitude of climate change. We can’t move fast enough.”