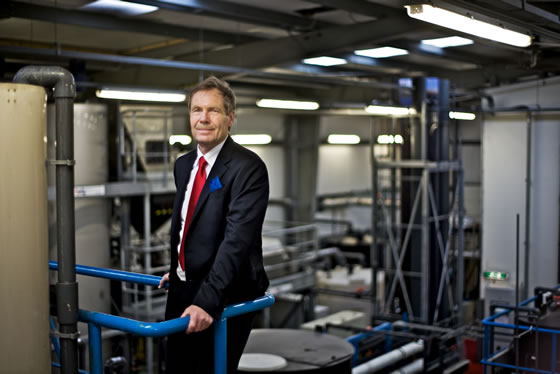 During the last year, we have again succeeded in making significant progress, although not as quickly as anticipated. The economic problems on the international markets have also had an impact on our company. Market players and governments have become more cautious and this is reflected in the speed in which decisions are being made. Despite the delays caused by a faltering economy, interest from the market is generally positive. Thus says Pieter Spohr in PWN Technologies’ annual report 2012 en perspectives 2013.

“In the first quarter of this year, a SIX®/CeraMac® pilot plant is delivered for South West Water in the UK. There is also concrete interest of San José in the US and talks are underway with SembCorp in Singapore. So in addition to PUB, Singapore’s National Water Agency, there is also promise of a series of potential in Singapore. We expected to launch our second major project for PUB in Singapore in late 2012, but we expect to see this happen in Q2 of 2013. In addition, we started our marketing activities in Australia and we are participating in a pilot study at Melbourne Water.

We want to establish a powerful market position and have the strength we need to take on this challenge. We invested in our organization and changed the governance structure. As of May 1 2013 the CEO, CFOO and CTO will form the Executive Board, supported by a management team with greater authority. Our organization which has effectively taken shape, is ready for growth. Controlled growth, being able to live up to all expectations.

Over the next two years we will create a solid base in our key markets, developing regional headquartes in Singapore and the Midwest of the US. That’s not only important being able to compete for contracts, it’s also vital to conduct customer driven R&D/innovation programs for third parties in South East Asia / Australia and in the US.

At the end of 2014, we aim to be a multinational company with a total of 80-85 FTE’s to experts, scientists, managers and technicians worldwide, a net turnover of 50-55 million Euro/year and a reasonable margin of profit for investment in new R&D and future innovations.